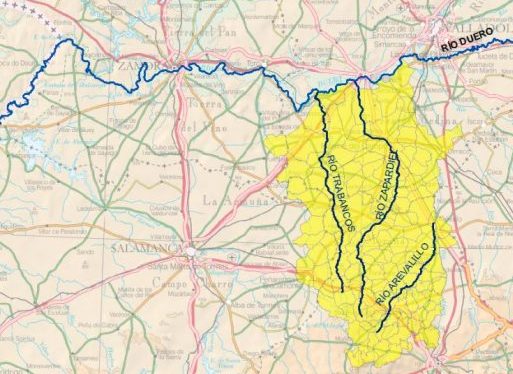 Description of the Works:

In 2014 the Duero Hydrographic Confederation submitted a proposal for an Integrated Project whose objective was to fully develop the River Basin Management Plan in the Adaja, Zapardiel and Trabancos river basins as a pilot experience, being this project an instrument to implement innovative, sustainable, participatory solutions, etc. exportable to the rest of the basin as advocated by the EU.

This proposal was not selected among those chosen, so on the occasion of the new call of the LIFE program for 2015 the Duero Hydrographic Confederation decided to resubmit a proposal. In this case, the scope of action is reduced to the Zapardiel, Trabancos and Arevalillo river basins, and to the territory delimited by the Medina del Campo aquifer.

With respect to the 2014 proposal, the upper part of the Adaja river basin is eliminated because it presents fewer pressures and threats, in order to focus the project in areas where aquatic resources are more threatened and prioritizing actions according to the objectives of the Basin Hydrological Plan.

The overall score obtained in all the evaluation criteria significantly improved the results of the proposal submitted for the previous call.